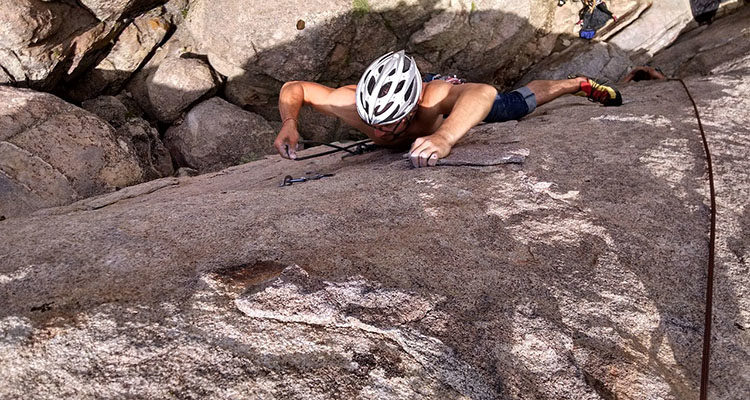 Rock climbing is an activity in which participants climb up, down or across natural rock formations or artificial rock walls. The goal is to reach the summit of a formation or the endpoint of a usually pre-defined route without falling. Due to the length and extended endurance required and because accidents are more likely to happen on descent than ascent, Rock Climbers do not usually climb back down the route. It is very rare for a climber to downclimb, especially on the larger multiple pitches (class III- IV and /or multi-day grades IV-VI climbs). Professional Rock climbing competitions have the objectives of either completing the route in the quickest possible time or attaining the farthest point on an increasingly difficult route. Scrambling, another activity involving the scaling of hills and similar formations, is similar to rock climbing. However, rock climbing is generally differentiated by its sustained use of hands to support the climber’s weight as well as to provide balance.

Rock climbing is a physically and mentally demanding sport, one that often tests a climber’s strength, endurance, agility and balance along with mental control. It can be a dangerous activity and knowledge of proper climbing techniques and usage of specialised climbing equipment is crucial for the safe completion of routes. Because of the wide range and variety of rock formations around the world, rock climbing has been separated into several different styles and sub-disciplines.

In How to Rock Climb, John Long notes that for moderately skilled climbers simply getting to the top of a route is not enough; how one gets to the top matters. In rock climbing, style refers to the method of ascending the cliff. There are three main styles of climbing: on-sight, flash, and redpoint. To on-sight a route is to ascend the wall without aid or any foreknowledge. It is considered the way to climb with the most style. Flashing is similar to on-sighting, except that the climber has previous information about the route including talking about the beta with other climbers. Redpointing means to make a free ascent of the route after having first tried it.

Most of the climbing done in modern times is considered free climbing—climbing using one’s own physical strength, with equipment used solely as protection and not as support—as opposed to aid climbing, the gear-dependent form of climbing that was dominant in the sport’s earlier days. Free climbing is typically divided into several styles that differ from one another depending on the choice of equipment used and the configurations of their belay, rope and anchor systems.

As routes get higher off the ground, the increased risk of life-threatening injuries necessitates additional safety measures. A variety of specialized climbing techniques and climbing equipment exists to provide that safety. Climbers will usually work in pairs and utilize a system of ropes and anchors designed to catch falls. Ropes and anchors can be configured in different ways to suit many styles of climbing, and roped climbing is thus divided into further sub-types that vary based on how their belay systems are set up. Generally speaking, beginners will start with top roping and/or easy bouldering and work their way up to lead climbing and beyond.

Lead climbing is a climbing technique. The lead climber ascends with the rope passing through intermittent anchors that are below them, rather than through a top anchor, as in a top-roped climb. A partner belays from below the lead climber, by feeding out enough rope to allow upward progression without undue slack. As the leader progresses he or she clips the rope into, using a runner and carabiners, intermediate points of protection such as active cams, or passive protection such as nuts; this limits the length of a potential fall. The leader also may clip into pre-placed bolts. Indoor gyms might have short runners pre-attached to fixed anchor points in the wall.