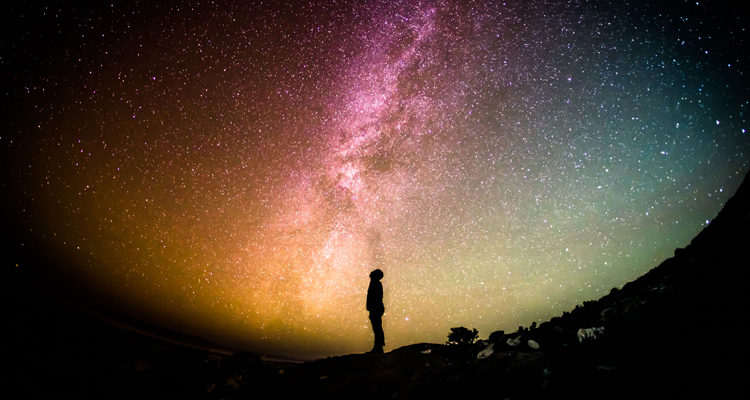 A star is a luminous sphere of plasma held together by its own gravity. The nearest star to Earth is the Sun. Other stars are visible to the naked eye from Earth during the night, appearing as a multitude of fixed luminous points in the sky due to their immense distance from Earth.

Historically, the most prominent stars were grouped into constellations and asterisms, and the brightest stars gained proper names. Extensive catalogues of stars have been assembled by astronomers, which provide standardized star designations.

For at least a portion of its life, a star shines due to thermonuclear fusion of hydrogen into helium in its core, releasing energy that traverses the star’s interior and then radiates into outer space. When the hydrogen in the core of a star is nearly exhausted, almost all naturally occurring elements heavier than helium are created by stellar nucleosynthesis during the star’s lifetime and, for some stars, by supernova nucleosynthesis when it explodes. Near the end of its life, a star can also contain degenerate matter.

Astronomers can determine the mass, age, metallicity (chemical composition), and many other properties of a star by observing its motion through space, luminosity, and spectrum respectively. The total mass of a star is the principal determinant of its evolution and eventual fate. Other characteristics of a star, including diameter and temperature, change over its life, while the star’s environment affects its rotation and movement. A plot of the temperature of many stars against their luminosities, known as a Hertzsprung–Russell diagram (H–R diagram), allows the age and evolutionary state of a star to be determined.

A star’s life begins with the gravitational collapse of a gaseous nebula of material composed primarily of hydrogen, along with helium and trace amounts of heavier elements. When the stellar core is sufficiently dense, hydrogen becomes steadily converted into helium through nuclear fusion, releasing energy in the process. The remainder of the star’s interior carries energy away from the core through a combination of radiative and convective processes. The star’s internal pressure prevents it from collapsing further under its own gravity. When the hydrogen fuel at the core is exhausted, a star with at least 0.4 times the mass of the Sun expands to become a red giant, in some cases fusing heavier elements at the core or in shells around the core. The star then evolves into a degenerate form, recycling a portion of its matter into the interstellar environment, where it will contribute to the formation of a new generation of stars with a higher proportion of heavy elements. Meanwhile, the core becomes a stellar remnant: a white dwarf, a neutron star, or (if it is sufficiently massive) a black hole.

Binary and multi-star systems consist of two or more stars that are gravitationally bound, and generally move around each other in stable orbits. When two such stars have a relatively close orbit, their gravitational interaction can have a significant impact on their evolution. Stars can form part of a much larger gravitationally bound structure, such as a star cluster or a galaxy.

Historically, stars have been important to civilizations throughout the world. They have been part of religious practices and used for celestial navigation and orientation. Many ancient astronomers believed that stars were permanently affixed to a heavenly sphere, and that they were immutable. By convention, astronomers grouped stars into constellations and used them to track the motions of the planets and the inferred position of the Sun. The motion of the Sun against the background stars (and the horizon) was used to create calendars, which could be used to regulate agricultural practices. The Gregorian calendar, currently used nearly everywhere in the world, is a solar calendar based on the angle of the Earth’s rotational axis relative to its local star, the Sun.

The oldest accurately dated star chart appeared in ancient Egyptian astronomy in 1534 BC. The earliest known star catalogues were compiled by the ancient Babylonian astronomers of Mesopotamia in the late 2nd millennium BC, during the Kassite Period (ca. 1531–1155 BC).[9]

The first star catalogue in Greek astronomy was created by Aristillus in approximately 300 BC, with the help of Timocharis. The star catalog of Hipparchus (2nd century BC) included 1020 stars, and was used to assemble Ptolemy’s star catalogue. Hipparchus is known for the discovery of the first recorded nova (new star). Many of the constellations and star names in use today derive from Greek astronomy.